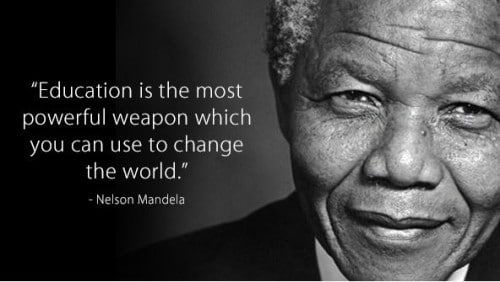 Our anonymous blogger is a Teach First teacher in an inner-city school.  These are their individual views and not the views of Edapt.

As Mandela made clear, education is everything. Being a first world country, we should be able to proudly declare that our children are benefiting from a first rate education. Sadly, to me, in my school, it is becoming increasingly more obvious that this isn’t the case. Not all students are being shaped into the well rounded, passionate individuals that we as a nation we want and need them to be. Are we losing this passion and dare I say it – actual learning – down the cracks of current policy?

When Mandela passed away the world stopped. In England I’d like to believe that most schools took a little time to reflect upon his life with their students and that students knew who he was without being told. In reality I’m not sure how accurate the second half of my belief would have been. Where I teach, many students recognised his name but a great many didn’t. In form class most of my Year 9 tutees couldn’t tell me who he was. One of my form, thinking they did know, attempted to educate the rest by declaring, ‘He’s the guy off the Uncle Ben’s rice packet.’

Now, let me just give you a second to reread that and let it sink in. Just so we are absolutely clear he was not joking. He genuinely believed that Nelson Mandela was the man on the front of a microwavable packet of food.

You might laugh at what you’ve just read. Lots of people I told did, including myself, with a sort of guilty – oh dear I really shouldn’t find this funny – sort of giggle. I feel I should clarify that I didn’t laugh at the time. I froze, silent at what I’d just heard. What do you say to that level of ignorance? It was like watching a really filthy snowman being rolled into existence. Someone else agreed that yes that was who he was. At one point during these 20 seconds of verbal absurdity another student made some comment about how they were sure he’d released an album a while back, but it wasn’t that good so he’d not paid attention to the name since.

In my next lesson, with my Year 11 class, I decided to tell them this story in an attempt to restore my faith. Instead it became apparent that at least five of my students thought he was Martin Luther King Jr., and so the filthy snowman grew. Every class I taught that day was a lesson in how we are failing our students. By the time the final bell went I was utterly dejected. In that one day I felt I was finally shown exactly what sort of individuals we are producing: fragmented and at times ashamed individuals. Every student that uttered a ridiculous comment soon gauged from my face that it shouldn’t have been said; many apologised to me. They asked me questions about him and listened in silence to the videos that I showed them. They wanted to know. The next day one girl admitted that she’d been too embarrassed to say she didn’t recognise who he was as it was clear she should. Lots of students across the country will have been taught about and honoured the man but the fact that even in one school there were so many that  didn’t is saddening. What is worse is it wasn’t even by their choosing.

The fact of the matter is that I think we have become blindsided by the desire to achieve academic success regardless of the cost.  Judging schools almost entirely on the percentage of students achieving 5A*-Cs has meant information that will not directly impact on grades is no longer valued in the same way.  Sure, having a stimulating debate on Nelson Mandela’s struggle against apartheid or allowing them to finish an entire book for pleasure is wonderful but if it isn’t on the exam why bother?

Sometimes we can’t, regardless of how much time we dedicate, push some Us or Fs into Cs, but an awareness of the world, general knowledge and curiosity are all things we can always influence and shape for the better. I fail to believe that it is more advantageous for a student to leave school with a C in English because their teachers have spent the last 3 years relentlessly drilling very targeted and specific information into them, rather than leave with a D in English and a love of reading because they read some incredible books from start to finish and spent time exploring them. For it is that love of reading that will ensure their education continues.  Surely that was what Mandela was talking about when he called education a weapon?

As performance related pay comes into play and the grade boundaries rise, we need to be careful, particularly in the schools with students whose home lives don’t allow for dinner table debates or foster a curiosity in the world. School is where they come to develop and if we make learning all about exams they will leave uneven, with brains filled with the buzz words to use on Paper 1, Question 2 and the belief that inspirational figures are rappers and food mascots.

March 8th schools reopening: what do teachers need to know?

There will be mass Covid testing in secondary schools - with parents expected to carry...

Do teachers have to wear face masks in school?

Staff in secondary schools and colleges are "being advised to wear face coverings in all...

The use of non-disclosure agreements (NDAs) in schools is rising, but what actually are they? The...